The CDSW has been held six times in Seattle in Spring and Fall 2014 and Spring 2015. So far, dozens of people have volunteered their weekends to teach hundreds of people to program in Python, to build datasets from Web APIs, and to ask and answer questions using these data. Through these workshops we've also collected some mentoring tips. 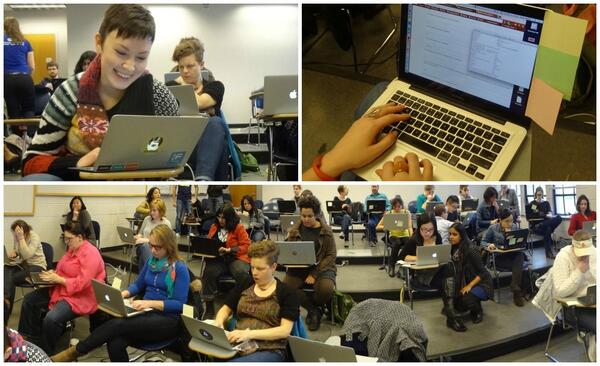 The sessions are scheduled for one Friday evening and three Saturdays all day. Each session involves a period for lecture and technical demonstrations in the morning. This is followed by lunch. The rest of the day consists of self-directed work on programming and data science projects supported by more experienced mentors.

Our very first workshops were originally modeled after the Boston Python Workshop but most of our curriculum is brand new and has been developed and modified by the mentors and with feedback from the participants.

Put on your own CDSW[edit]

Curriculum for the workshops has been developed by Benjamin Mako Hill, Ben Lewis, Frances Hocutt, Jonathan Morgan, Mika Matsuzaki, Tommy Guy, and Dharma Dailey. The events are only possible with the help of a long list of over 40 volunteer mentors across the two events. The workshops have been designed with lots of help and inspiration from Shauna Gordon-McKeon and Asheesh Laroia of OpenHatch and lots of inspiration from the Boston Python Workshop.

Based on the questions and requests we received from participants we compiled a list of resources available below:

In order to make the process of creating future resources easier we compiled a list of best practices for editing the different types of pages on this wiki: Community Data Science Workshops (Core)/Wiki Best Practices

Retrieved from "https://wiki.communitydata.science/index.php?title=Community_Data_Science_Workshops&oldid=207136"
Category:
This page was last edited on 6 October 2020, at 22:54.
Content is available under Attribution-Share Alike 3.0 Unported unless otherwise noted.
Privacy policy
About CommunityData
Disclaimers