Although cultural and linguistic diversity on the Internet has exploded, English content remains dominant. Surprisingly, this appears to be true even on peer production communities like Wikipedia driven by increasingly linguistically diverse groups of participants. Although Wikipedia exists in almost three hundred language versions, participation and content creation is not distributed proportional to readership—or even proportional to editors’ mother tongues. A widely discussed puzzle within studies of online communities is that some small language communities thrive while other similar communities founder.

I hope to study this dynamic in a pilot project in Indic-language Wikipedia communities. There are dozens of Wikipedias in Indian language versions. I hope to study the experiences of several Indic-language Wikipedia communities with different levels of success in building communities of online participants but with similar numbers of Internet-connected native speakers, that face similar technical and linguistic challenges, that have similar socio-economic and political conditions, and so on.

We are looking for people interested in participating in this study! In exchange for your participation, you will receive a $20 gift card.

To join the study, you must be at least 18 years of age and must be an active member of your native Indic language Wikipedia. You should also feel comfortable having an interview discussion in Hindi or English. 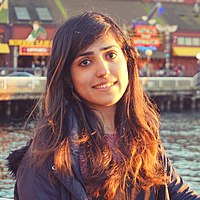 I am a design researcher, currently a graduate student in the Information School at the University of Washington, Seattle. My research interests revolve around online communities, peer-production, and open-source software. I have contributed to Wikipedia projects and have supported Indian Language community events in the past. My research involves identifying the success models of underrepresented language communities on the Internet and adopting them to make informed design decisions for similar communities to reinforce the inclusiveness of the Web.

Retrieved from "https://wiki.communitydata.science/index.php?title=Knowledge_Gaps&oldid=181399"
This page was last edited on 20 November 2019, at 00:22.
Content is available under Attribution-Share Alike 3.0 Unported unless otherwise noted.
Privacy policy
About CommunityData
Disclaimers