The reddit_cdsc git repository contains tools for working with Reddit data. The project is designed for the hyak super computing system at The University of Washington. It consists of a set of python and bash scripts and uses pyspark and pyarrow to process large datasets. As of March 1st 2021, the project is under active development by Nate TeBlunthuis and provides scripts for: 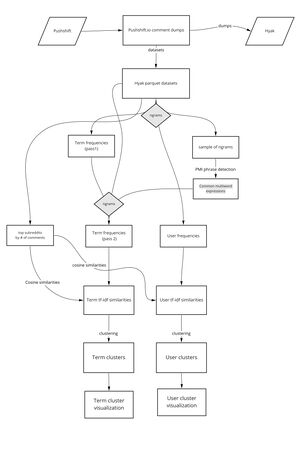 The TF-IDF for comments still has some kinks to iron out to remove hyper links and bot comments.

Pushshift dumps are huge compressed json files with a lot of metadata that we may not need. It isn’t indexed so it’s expensive to pull data from just a handful of subreddits. It also turns out that it’s a pain to read these compressed files straight into spark. Extracting useful variables from the dumps and building parquet datasets will make them easier to work with. This happens in two steps:

The final datasets are in /gscratch/comdata/output.

Breaking this down into two steps is useful because it allows us to decompress and parse the dumps in the backfill queue and then sort them in spark. Partitioning the data makes it possible to efficiently read data for specific subreddits or authors. Sorting it means that you can efficiently compute agreggations at the subreddit or user level. More documentation on using these files is available here.

By default, the scripts in similarities take a TopN parameter which selects the subreddits to include in the similarity dataset according to how many total comments they have. You can alternatively pass a value to the included_subreddits parameter to a file with the names of the subreddits you would like to include on each line.

Subreddit similarity datasets based on comment terms and comment authors are available on hyak in /gscratch/comdata/output/reddit_similarity. The overall approach to subreddit similarity seems to work reasonably well and the code is stabilizing. If you want help using these similarities in a project, just reach out to Nate.

TF-IDF is common and simple information retrieval technique that we can use to quantify the topic of a subreddit. The goal of TF-IDF is to build a vector for each subreddit that scores every term (or phrase) according to how characteristic it is of the overall lexicon used in that subreddit. For example, the most characteristic terms in the subreddit /r/christianity in the current version of the TF-IDF model are:

I then combine them using some smoothing to get:

The process for building TF-IDF vectors has four steps:

The main reason that I did it in 4 steps instead of one is to take advantage of the backfill queue for running tf_comments.py. This step requires reading all of the text in every comment and converting it to a bag of words at the subreddit-level. This is a lot of computation that is easily parallelizable. The script run_tf_jobs.sh partially automates running steps 1 (or 3) on the backfill queue.

TF-IDF is simple, but only uses single words (unigrams). Sequences of multiple words can be important to account for how words have different meanings in different contexts or how sequences of words refer to distinct things like names. Dealing with context or longer sequences of words is a common challenge in natural language processing since the number of possible n-grams grows like crazy as n gets bigger. Phrase detection helps this problem by limiting the set of n-grams to those most informative.

PMI is an quantity derived from information theory. The intuition is that if two words occur together quite frequently compared to how often they appear separately then the cooccurrance is likely to be informative.

In tf_comments.py if --mwe-pass=first then a 10% sample of 1-4-grams (sequences of terms up to length 4) will be written to a file to be consumed by top_comment_phrases.py. top_comment_phrases.py computes the PMI for these possible phrases and writes those that occur at least 3500 times in the sample of n-grams and have a PWMI of at least 3 (about 65000 expressions).

tf_comments.py --mwe-pass=second then uses the detected phrases and adds them to the term frequency data.

Once the tf-idf vectors are built, making a similarity score between two subreddits is straightforward using cosine similarity.

Intuitively, we represent two subreddits as lines in a high-dimensional space (tf-idf vectors). In linear algebra, the dot product (

) between two vectors takes their weighted sum (e.g. linear regression is a dot product of a vector of covariates and a vector of weights).
The vectors might have different lengths like if one subreddit has more words in comments than the other, so in cosine similarity the dot product is normalized by the magnitude (lengths) of the vectors. It turns out that this is equivalent to taking the cosine of the two vectors. So cosine similarity in essence quantifies the angle between the two lines in high-dimensional space. If the cosine similarity between two subreddits is greater then their tf-idf vectors are more correlated.

Cosine similarity with tf-idf is popular (indeed it has been applied to Reddit in research several times before) because it quantifies the correlation between the most characteristic terms for two communities.

Compared to other approach to similarity like those using word embeddings or topic models it may struggle to handle polysemy, synonymy, or correlations between different terms. Using phrase detection helps with this a little bit. The advantages of this approach are simplicity and scalability. I’m thinking about using Latent Semantic Analysis as an intermediate step to improve upon similarities based on raw tf-idfs.

Even still, computing similarities between a large number of subreddits is computationally expensive and requires

dot-product evaluations. This can be sped up by passing similarity-threshold=X where

into term_comment_similarity.py. I used a cosine similarity function that’s built into the spark matrix library which supports the DIMSUM algorithm for approximating matrix-matrix products. This algorithm is commonly used in industry (i.e. at Twitter, Google) for large-scale similarity scoring.

Retrieved from "https://wiki.communitydata.science/index.php?title=CommunityData:CDSC_Reddit&oldid=220252"
This page was last edited on 28 February 2021, at 22:27.
Content is available under Attribution-Share Alike 3.0 Unported unless otherwise noted.
Privacy policy
About CommunityData
Disclaimers