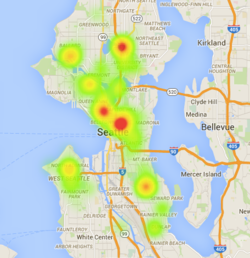 In this project, we will explore a few ways to analyze data from data.seattle.gov using the Socrata API, the Google Maps API, and Google Fusion tables. We'll learn how to visualize new residential construction in Seattle over time, by neighborhood, and by map location using graphs and heatmaps.

Topics we will cover

We will also explore an important non-technical part of data science: thinking critically about data. Thinking critically about the data you have, and what conclusions you can draw from it, is especially important when you are visualizing data, because its easy to mislead people with visualizations. We'll discuss how visualizations based on incorrect data can lead people to make false conclusions, using an example from a recent visualization of building demolitions published in the Northwest design magazine Arcade.

Question
Has the rate of apartment construction increased since 2010?

Other data.seattle.gov datasets with neighborhood, timeseries, and/or location data

Other Socrata sites that use this API

Retrieved from "https://wiki.communitydata.science/index.php?title=Community_Data_Science_Workshops_(Fall_2015)/Day_3_Projects/Civic_data&oldid=28907"
Category:
This page was last edited on 4 November 2015, at 19:32.
Content is available under Attribution-Share Alike 3.0 Unported unless otherwise noted.
Privacy policy
About CommunityData
Disclaimers